Chris Matthews: Obama Was ‘Coy, Cute, Too Clever By Half’ During Debt Negotiations 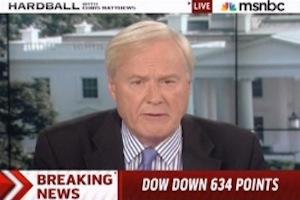 Chris Matthews seems to be losing faith in President Obama’s political strategy and worries about his ability to handle the economy. Earlier he wondered if Obama is still “running the train” and now with MSNBC contributors Michael Steele and Ed Rendell, Matthews wanted to know what is Obama waiting for to put a big economic plan on the table? Something that Steele reminded Matthews is the same request Republicans have been making for weeks.

Rendell admitted that he wasn’t too impressed with Obama’s speech today, since it was all words and no specifics. Instead Rendell advised that Obama get behind a huge infrastructure plan, follow what he truly believes in and then act like a leader, because if he takes these steps then Rendell is confident Obama would get a landslide victory in 2012. Even Steele agreed that what Obama needs to do is put forth his vision and tell everyone in Congress “follow me or get out of the way.”

Yet Matthews was uncharacteristically harsh too, saying about the S&P downgrade “you can blame the Tea Party, I do,” but then turning a critical eye to Obama and his failings during the debt negotiations. Matthews described Obama’s hesitancy to lay out a plan with specific budget cuts and specific tax reforms as Obama “being coy, cute, too clever by half.” Instead, Matthews says now is the time to create real jobs and to stick his neck out by creating real entitlement cuts, so that then Obama can finally go back to Republicans and say now is the time to “tax the friggin’ rich.”