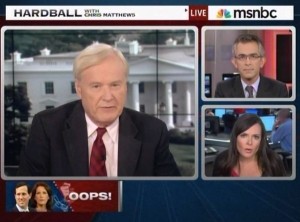 Chris Matthews had some fun today analyzing the “strange” marriage pledge signed by Republican presidential candidates Michele Bachmann and Rick Santorum. Not only did the pledge from The Family Leader have odd provisions regarding slavery, but it also provided guidelines for “robust childbearing” and “better sex.” As Matthews prepared for the conversation with MSNBC’s Richard Wolffe and Newsweek’s Shushannah Walshe, he warned “we’re heading into nut country.”

At first glance the pledge signed by Bachmann and Santorum seemed to merely uphold the notion of a traditional family. However, one section (since removed) stated that “a child born into slavery in 1860 was more likely to be raised by his mother and father in a two-parent household than an African-American baby born after the election of the USA’s first African-American President.” Such a ludicrous suggestion that black families may have actually been better off during the days of slavery, left Matthews to conclude that desperate candidates will sign absolutely anything. Walshe found it particularly troubling that candidates will sign pledges that they don’t even read, and Matthews joked what is even more scary is what if Bachmann or Santorum actually did read it.

Matthews also noticed the repeated reference of “one man and one woman” in the definition of marriage throughout the pledge and thought it was a direct shot at Mitt Romney and Mormonism. Yet most comical to Matthews was the fact that presidential candidates were now making vows regarding what constitutes “better sex” and “robust childbearing.” Wolffe smartly concluded that the apparent goal of the pledge was to designate certain behavior to not be normal, yet it actually just demonstrated the weirdness of this group who drafted the pledge.