Chris Matthews: Palin “Talks Like A Cuckoo Clock” And Gingrich Is An “Enemy To Our Civilization” 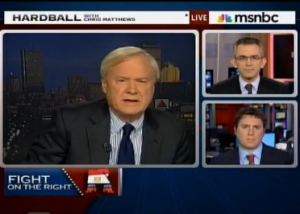 Chris Matthews maybe heard a complaint yesterday that his constant criticism of Glenn Beck was getting boring. So instead of leaving Beck alone, today to mix things up he also went after Sarah Palin and Newt Gingrich and their collective “crazy” comments about the situation in Egypt. Here we go again.

With MSNBC‘s Richard Wolffe and Politico‘s Ben Smith, Matthews played a series of clips and then immediately followed each with some unique ridicule. First up was Gingrich warning against the U.S. talking to the Muslim Brotherhood and allowing them to participate in any way in a post-Mubarak Egyptian government, since he declared them to be a “mortal enemy of our civilization.” Matthews responded, “I think if you look closely at Newt Gingrich you see a mortal enemy to our civilization.” Next up was Beck, immediately followed by a return appearance from Palin to Matthews’ strike zone, in a clip where she suggested President Obama should be doing more to explain to the American people what exactly is going on in Egypt. Matthews replied, “she talks like a cuckoo clock. In fact, I think when she gets that name, Sarah Palin, patented that’s what she should sell, cuckoo clocks. Cuckoo clocks with her coming out every hour.”

Although this played like a Matthews’ greatest hits album it still leaves viewers wondering what exactly is Matthews’ goal with such segments? If he’s truly interested in a schism in the Republican party between the “crazy talk radio crowd” and others like Bill Kristol and Senator Lindsey Graham, then why not maybe have a conservative on the panel to seriously discuss that issue? Instead Matthews wondered if Beck would “pass a competency test” and wasted time asking whether Beck will speak at the Republican convention in 2012, to which Wolffe strangely entertained the question by answering “depends on the candidate.” Matthews himself admits that handling the situation in Egypt is not easy and apparently neither is a conversation on the topic that isn’t dominated by insults.