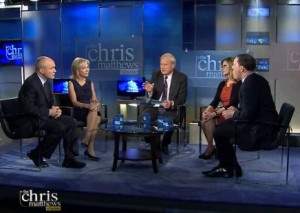 On Sunday, Chris Matthews‘ panel took a look at the state of the presidential race with just over two weeks left. Dissecting where each candidate stands, the panelists debated what President Barack Obama‘s and Mitt Romney‘s individual challenges are — and how they could meet those challenges to close the deal.

Obama’s endgame strategy should consist of three things, Matthews said: project a positive vision, ramp up populism and show guts in the debate. He offered Romney’s endgame list as well: keep the “are you better off?” message, present himself as a fixer and look like a commander in chief.

Time magazine’s Michael Duffy noted that Romney is on the offensive, and if he plays his cards right, he can continue to keep this race close through to the end. MSNBC’s Andrea Mitchell noted that a getting a “lift” is more difficult for Obama because he has to combat Romney’s best argument, one that “can be a penetrating argument with enough money” in the closing days of the race. That argument being, “What makes you think that he will do better in the next four years than he did in the first four years?”

Agreeing with that sentiment, the Washington Post‘s Kathleen Parker chimed in saying that if Romney does win, it will be because of the Mr. Fixit-esque argument. Again noting Romney’s sweeping victory in the first debate, Matthews questioned whether that the effect that brought on is at all reversible for Obama.

POLITICO’s John Harris said it depends on what the electorate is fundamentally looking for — a reason to vote for Romney, or a reason to vote for Obama? He argued the latter. Parker added it doesn’t help Obama to be focusing on smaller things, like the Big Bird quips, which Harris argued the Romney campaign has been using as well.

Mitchell added that after Team Obama spent millions to “tear down” Romney and make him an “unacceptable” candidate, he has now emerged as an “acceptable” one. And therein lies Obama’s challenge.

“The president has to make the case for four more years,” Matthews said. “For whatever reason, he hasn’t done it.”

That’s the mystery, Duffy remarked. Why he hasn’t laid out what he’ll do in a second term. If Obama was honest about his plans, Harris said, it wouldn’t be politically popular.

The panel then moved on to Libya, an area in which Obama needs closure, Matthews said. Mitchell tried to parse through who knew what and when, and said the bureaucratic process didn’t get word to Ambassador Susan Rice in time (i.e., before she went on a series of shows).

“Why doesn’t he just have an address to nation and clarify the story?” Parker asked. Matthews agreed. Most people would think that “if it’s better than it looks, they’ll tell you,” he said. “And it’s looks pretty bad.”

The panel ended on a more general note: In the last two weeks, is it better to be the underdog, or the guy with confidence? Harris said people want to back a winner, with Parker chiming in that Romney has the momentum. Duffy and Mitchell agreed that the candidate wants to project the image of a fighter.