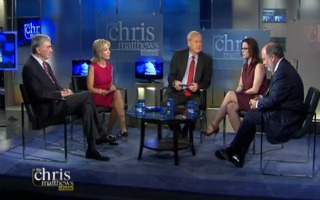 In a wrap up of the political developments of the week, the panel guests on NBC’s The Chris Matthews Show took a critical look at the first presidential debate and concluded that President Barack Obama more than underperformed at the debate – he looked “inept” and appeared to show a ‘passive resistance’ that was unlikely to win him a second term.

“Big,” Donaldson replied. “Think John Kennedy in 1960. Think Ronald Reagan in 1980. It could possibly be that big, because the president seemed to be on a glide path toward reelection. And then, all of the sudden, here comes the raging bull – Mitt Romney – out of the dock. And the toreador runs for the safety exists instead of counterpunching.”

“What happened to Barack Obama? I’m not certain, I don’t know,” Donaldson said. “But I know this: If he comes to the next two debates with the same demeanor – with the same passive resistance – he’s losing.”

“It was one of the most inept performances by an incumbent president that I’ve ever seen,” said TIME Magazine columnist Joe Klein. He said that Obama’s performance was indicative of his deferential demeanor and his aversion towards public fights. However, Klein said that Obama opted for “unilateral disarmament” in the face of Romney’s attacks on his record.

MSNBC host S.E. Cupp said that her contacts within the Romney campaign see this debate as facilitating a reset of the campaign in three parts. First, they wanted a fight, which they got. Second, the debate ignited the attentions of marginally interested swing voters. Finally, they feel that the debate allowed disaffected Obama voters from 2008 the license to take a second look at Romney.

“They see this as a hat trick moving forward,” said Cupp.

Asked if the jobs report from September which showed the official unemployment rate ticking down below 8 percent for the first time in nearly four years would negate the debate’s impact on the polls, NBC reporter Andrea Mitchell said that it was September’s jobs numbers but October’s that would have the largest impact on the race.

“The job creation number is still anemic,” said Mitchell. “We’re still bouncing along the ground of 1.9 percent GDP. So, economic growth is still very slow. But, certainly, it’s still a great talking point for the president.”

Klein said that the trend in job growth was moving in the right direction, but Mitchell countered that much of that growth comes from the public sector and would be challenged by Republicans.