Chris Matthews Panel: Mitt Romney Will Be The Nominee Because Rick Perry ‘Unelectable’ 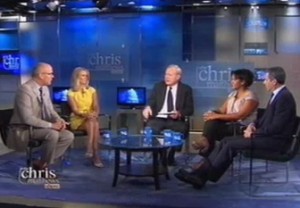 Despite an instant, commanding lead in the polls, newly-minted GOP presidential candidate Gov. Rick Perry is already being viewed as “unelectable.” The panel of reporters on Sunday’s The Chris Matthews Show reached a general consensus that Perry’s loose talk and extreme views will eventually lead the Republican establishment to choose the more moderate, more electable Mitt Romney to challenge President Obama in the general election.

Barely a week into his campaign, the Texas Governor has talked himself into trouble, and not just with liberals and Democrats. While John Heilemann sees Perry’s smashmouth certitude as an advantage over Mitt Romney, The New York Times‘ Helene Cooper points out that, eventually, Republicans are going to have to think about beating Barack Obama, not each other. In perhaps the best piece of news for Romney, Cooper says that he is still the candidate that the White House is most worried about.

Matthews asked if the Republican base would prefer “beating up on” Barack Obama for four more years, rather than having to defend Mitt Romney for eight years. BBC’s Katty Kay concluded, “In the end…they still want to be the party in power, which is why they’re probably going to end up nominating Mitt Romney, because they think he is more electable.”

That word, “electability,” is a dirty one to engaged political observers on both sides, because it’s usually code for “too much like his party is supposed to be.” Even if primary voters are willing to move a few steps toward the middle of the road, it’s hard to see them overlooking Mitt Romney’s “Obamneycare” baggage, and his shifting positions on key conservative issues like abortion and climate change. If they’re going to pick an “electable” candidate who disagrees with some of the fringiest positions, it stands to reason that they’d prefer someone more consistent, without all that baggage, like Jon Huntsman.

Unfortunately for the Republican establishment, Huntsman’s poll numbers are DOA, and talk about a candidate’s “electability” isn’t likely to persuade the base away from Perry. That’s a good thing for the White House, because as worried as they may be about Romney, they saw Huntsman coming from miles away.

Here’s the clip, from The Chris Matthews Show: