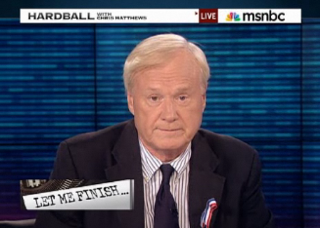 Chris Matthews concluded his last program before September 11, 2011 with a heartfelt attempt to explain what had happened to the national consciousness in this past decade. Something was missing from the America he so dearly loved, he explained; the “national soul” had been replaced by partisan bickering and rendered the nation aimless along the way.

In a moving tribute to the country he proclaims to love so dearly, Matthews warned that the absence of an understanding of the term “war effort” was just the beginning in the devolution of the national psyche. “This spirit captured in the phrase ‘war effort’ is as foreign to us now as those old news reels at the movie theaters,” he argued, calling it the “essential force and feeling missing in this country today.” He didn’t take a stab at determining when Americans had forgotten what a collective goal as a nation meant, but that it had happened, he suggested, sometime after September 11. “Where did it go, this America, this national soul whose absence leaves our daily sense of this country so… soulless?”

The “clattering clash of separate interests,” he argued, had replaced this sense, though, in making this claim he does wax over the fact that political and special interest factions of all types were lauded since the days of the Articles of Confederation, as James Madison wrote in Federalist Paper #10 that special interests in conflict were the only real path to a united country. That claim has been equally proven and disproven in different national scenarios, but the way it exists now, “making each day by the latest offense taken,” seemed fatal to Matthews.

That is not to say that it is certainly dead. Matthews argued we had seen it in the immediate aftermath of 9/11, and that it lives still within us, perhaps hiding from the fears of the outside world– and to awaken it, Americans need only to long for that feeling of “simply being an American, not anything else, that we most proudly wish to feel.”