Chris Matthews Rants: Anybody Who Puts Newt Gingrich In The White House ‘Has This On Their Conscience’ 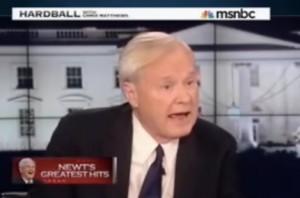 MSNBC’s Chris Matthews isn’t doing a good job of hiding any biases he might have against Newt Gingrich. On Tuesday night, he went off on the GOP front-runner, slamming Gingrich for his excuses for infidelity and calling comments he made to The National Review last year, “complete racist crap.”

Matthews aired what he deemed to be Gingrich’s five most-despicable moments in a reverse countdown with Nia-Malika Henderson and Dana Milbank, both of The Washington Post. At one point, he managed to slam both Gingrich and website commenters, touching on remarks Gingrich made at a church this year about his grandchildren growing up in a, “secular atheist country, potentially one dominated by radical Islamists”:

“You go down below the surface of the earth, the ground level — you meet people down there, bloggers — way down in the sub-basements. They talk like this. This is the kind of comments you get on a column when you write in the comment list.”

Some other choice quotes from Matthews:

-“I think it’s absolute B.S. It’s B.S.” — on Gingrich saying his adultery, in an interpretation of comments by Matthews, was a result of his patriotism.
-“Anybody who defends this has a problem with this country.” — on Gingrich’s comments to The National Review in 2010, suggesting President Obama played a wonderful con on the American people, and intimating that he had a Kenyan anti-colonial mindset.
-“You are not really American yourself” — to Gingrich, on his comments about both President Obama and earlier comments on Susan Smith‘s early-90s murder of her children.

Matthews eventually wrapped up the segment by raising his voice and passionately blasting Gingrich:

“How many nuclear weapons would you put in this guy’s hands? It’s not common sense, it’s not even American. I don’t know what it is. And you’ve got to add these up. And, by the way, those who vote for this, guys, are responsible for him. You can’t just say I was angry that day, or I didn’t like Obama. Anybody who puts this guy in the White House has this on their conscience… He scares me.”

Watch the full clip of Matthews’ anti-Gingrich rant below, courtesy of MSNBC: