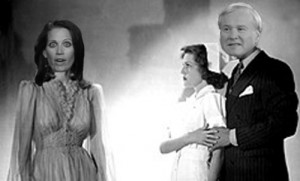 Political pundits and hosts like to come up with little running insults for the people they don’t like. Not only does it help belittle and dehumanize your political enemy or rival, it also serves as a fun gag for your regular viewers. Some fun examples are Rush Limbaugh always calling Harry Reid “Dingy” or Keith Olbermann always calling Glenn Beck “Lonesome Rhodes.” Well, we can now add another pet name to that illustrious group. Apparently Chris Matthews is unable to discuss Michele Bachmann without referring to her as “a zombie.”

The first instance we could find came on election night when Matthews asked the Congresswoman if she was “hypnotized.” As fans of film know (and anyone who watches Hardball enough knows that Matthews makes at least two random movie references a night), the term “zombie” originally meant someone who was hypnotized, primarily by a West African voodoo trance like in the 1941 Val Lewton classic, I Walked with a Zombie. So, it was only a hop, skip, and a slow, trance-like stumble for Matthews to get to the term George Romero cemented in the public’s mind.

Last month, Matthews was saying Bachmann displayed “the behavior of a zombie” again when he was amused the woman could ever end up on something called an “Intelligence Committee.” And, last night, while discussing Bachmann’s comments on the potential raising of the debt-ceiling, Matthews went for the third, officially making this a trend:

“Let’s listen to Michele Bachmann, your new boss. By the way, she may be a zombie answering this. Somebody out there – Boris Karloff, I don’t know – is giving her orders.”

Over at Breitbart.tv, they’re calling Matthews a “mean-spirited bully” for this. Nah, “Zombie Bachmann” is just entering the proud pantheon of pundit pet names. And, remember; he doesn’t mean she’s going to devour progressives’ heads because a space probe exploded. He just means there’s a voodoo chief in the GOP that’s controlling her.

Check out last night’s clip from MSNBC below: