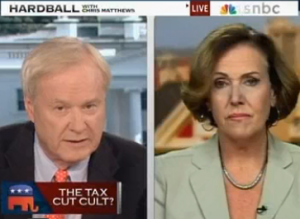 Chris Matthews is scared that the Tea Party influence on Republicans may result in this country going off the cliff and soon resembling Greece. Matthews told his guest Joan Walsh that he sees “fanatics” who don’t believe the deadline for raising the debt ceiling is real and who seem very willing to let the country default on its loan obligations. And Walsh provided Matthews with little comfort to soothe his fears.

Walsh described the Republican position throughout these budget negotiations as “economic hostage-taking” and urged President Obama not to cave into this “shrieking on the right” that continues to unreasonably demand no taxes can be increased. Walsh also pleaded with Matthews, “please don’t put me on the far left because I’m not.” Matthews worried we will soon be viewed as a “deadbeat country” and argued there is no way to have a compromise without raising taxes.

Then in the final moments, as Walsh wrapped up her point about the need for Republicans to keep tax increases on the table, Matthews blurted out “I agree it’s terrorism.” The random statement was odd since nobody suggested anything about terrorism, leaving Matthews to not really “agree” with anyone. Maybe Matthews was just eager to wrap-up the segment and dropped such an extreme comparison to get Walsh to agree and stop talking, or maybe Matthews really thinks a stubborn Republican economic position amounts to terrorism? Either way, the rhetoric certainly seems to be heating up.