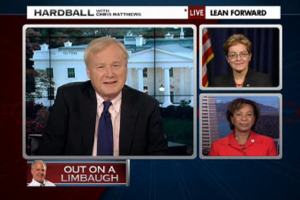 Rush Limbaugh did not react well to the Democratic Party leadership struggle resulting from the Democrats losing their minority. Decrying the “white racist leadership” of the Democratic Party, he called for Congressman Jim Clyburn to receive a higher post– or, at least, a post that would allow him to keep all the perks of House leadership: “driving Miss Nancy.” Chris Matthews tried to make heads or tails of the comment, but didn’t seem to get very far.

The comments were laden with racial undertones– “he won’t be in the back of the bus” being the most overt, though Matthews also noted “comparisons with Morgan Freeman“– something Matthews had a hard time understanding. He explained the comments as Limbaugh reacting to an opportunity: “he has seen an opportunity once again to see it all through race.” Then, to give more context to his language, Matthews played for his guests, Democratic Reps. Marcy Kaptur and Barbara Lee , a “greatest hits” of Limbaugh’s most offensive comments.

“Consider the source,” Rep. Lee told Matthews, arguing that the comments, while offensive, are not to be taken with much consideration, as “no one is going to change Rush Limbaugh.” Rep. Kaptur highlighted the accomplishments of Rep. Clyburn and decried Limbaugh’s tactics as well, though noting that “we have problems inside both problems with leadership positions.”

In the end, Matthews summed up the situation in an aphorism: “The only thing worse than bleeding is not knowing you’re bleeding.”

The segment from last week’s Hardball via MSNBC below: