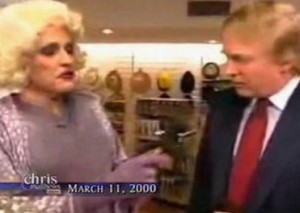 On Sunday morning’s The Chris Matthews Show, Donald Trump‘s potential presidential candidacy may have entered a new phase, as host Chris Matthews dug up some Clinton-era clips of Trump, including SNLer Darryl Hammond‘s dead-on impression, and a disturbing skit that featured The Donald “motorboating” a tarted-up Rudy Giuliani. While Senate candidate Christine O’Donnell had to combat her video skeletons by telling voters “I am not a witch,” Trump’s current candidacy isn’t likely to suffer much by comparison to his own.

While Trump has been providing a steady stream of current cable news fodder for weeks, this is the first time I’ve seen anyone reach back into the video archives to try and embarrass Trump, in much the same way that Real Time host Bill Maher did with Senate candidate Christine O’Donnell (R-DE). There are a few key differences, though.

For one thing, Maher’s O’Donnell library, in the final analysis, didn’t amount to much beyond the now-infamous witchcraft dabbling confession. Granted, that clip was probably enough, but in Trump’s case, there is a vast, ANWR-like reservoir of video embarrassment that O’Donnell’s oeuvre can’t begin to compare with. Trump has spent his adult life sticking his face in front of cameras and ejecting from it whatever was on his mind.

More importantly, though, Christine O’Donnell, whether you supported her or not, at least had the good sense to run away from the perceptions that those TV ghosts reinforced. She may have fumbled the execution, but she had the right idea, and tried to present herself as a serious candidate for high political office.

The biggest obstacle to O’Donnelling Trump, however, is the fact that his current antics are at least as zany as anything Matthews, Maher, or anyone else, can dig up. Although not his only sketchy strategy, Trump’s candidacy has quickly been defined by his planting of the Birther flag, which has earned him a shortcut to the top of Republican primary polls, but is likely to play as poorly with independents as declaring, “Y’know what? I am a witch!”

Whatever the effect, these certainly won’t be the last Classic Trump clips you’ll see during this campaign. From NBC News: