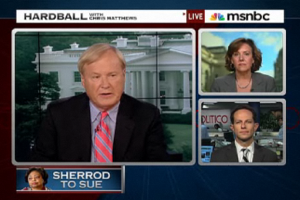 Today on MSNBC’s Hardball, Chris Matthews tried to debate Salon‘s Joan Walsh and former Gov. Howard Dean that Andrew Breitbart‘s version of the controversial Shirley Sherrod speech was completely unedited. Considering there were about 35 minutes missing from that tape, this was wrong for obvious reasons. But if you caught the 7PM rerun, you wouldn’t have seen that, because Hardball retaped the segment, this time with Matthews admitting the Breitbart version was incomplete.

In the initial live 5PM segment, the conversation between Dean, Matthews, and Walsh turned uncomfortable as Matthews repeatedly defended Breitbart’s tape as “unedited.” After several “that’s not true”s and “you’ve got to trust me on this”s, Matthews still insisted the video was unedited, and, when asked if he had seen the news on the Drudge Report, snapped, “I don’t watch Drudge.” Take 1 of the segment is below:

The above video never made it to the online Hardball channel, as it appears that sometime in between the two airings of the program, the decision was made to do the segment live once again at 7PM, because what aired during what is typically (and, with this segment the exception, was) a rerun was the following video– the same discussion, except with Matthews agreeing that the video was edited and, instead of Gov. Dean, Politico‘s Ken Vogel:

In the second take, Matthews emphasizes the fact that the Breitbart tape was, in fact, incomplete, and even plays the Breitbart version of the tape to make the point that it was so. At the end of the segment, Matthews acknowledges the errors in the first take, telling the audience before he thanks Walsh for returning:

Hardball has been around for well over a decade, there is a chance that this isn’t the first time they’ve had to retape a segment to replace what would have been the typical rerun. But outside of special Election Day editions of the program where Matthews is embedded on the campaign trail, this is the first time in recent memory that Hardball has run live at 7PM, and probably the first time when the program has run live for only one segment, only to return to the rerun afterwards, barring a major news break.

It seems that Matthews and his crew were not willing to let history repeat itself thanks to a preplanned rerun, and on the rest of the network, MSNBC rarely, if ever, retapes segments for reasons outside of technical error (Matthews not knowing the facts on the Sherrod story is certainly not the fault of technology). It’s a truly rare occasion to see a cable news personality admit a mistake– the best that can typically be hoped for is a passing apology on the night after– and impressive that it took less than two hours for Matthews to make his segment right and acknowledge that things didn’t go so smoothly the first time around.