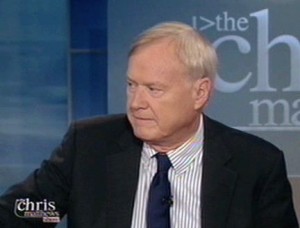 On his show today, Chris Matthews discussed the Rick Perry–Mitt Romney matchup with his panel and wondered whether the GOP would end up choosing the candidate more in line with their philosophy or the one who (for now) has the better chance of winning.

Andrew Sullivan admitted he was surprised by Mitt Romney recently because “he used to be far clumsier [and] more obvious in his pandering.” CNN’s Gloria Borger attributed this to 2012 being the second presidential election he has dipped his toes into. She argued that he learned from his mistakes the first time around, and he benefits this time from being surrounded by weaker candidates.

Matthews brought up Perry’s recent attempts in New York to gain more Jewish support. Helene Cooper, White House Correspondent for The New York Times, highlighted past Republican attempts to get the Jewish vote; unsuccessful attempts, as the Democrats still have a significant amount of support from the Jewish community.

Michael Gerson, columnist for The Washington Post, argued that one of Perry’s main problems right now is the perception that he is uninformed about foreign affairs and he would need to overcome that.

Finally, the panel debated whether Sarah Palin or Chris Christie would finally end the speculation and run for president. Sullivan argued that Palin definitely is, but said, “I will never be happier than the day I’m proven wrong about that.” No one on the panel seemed confident Christie would enter the race.