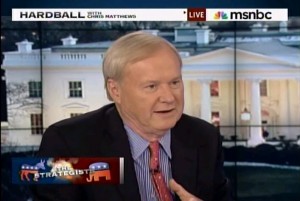 Matthews dismissed the appearance as an “infomercial” and “like…selling makeup foundations.” And while Harris said he had no problem with going on Hannity, he does have a problem with Palin not trying harder to broaden her audience, saying that “she’s missing a real opportunity if that’s all she does.” Matthews even predicted how part of the interview will go:

“She’ll come up with some contortion of how she used [“blood libel”], and Sean will say, “I get it now” or some ridiculous thing.”

Matthews’ other guest, Democratic consultant Steve McMahon, was even less sympathetic to Palin’s cause, lambasting her for “claim[ing] to be the victim” after coming under fire for the now-infamous crosshairs map. Matthews piled on some more, saying he believes it’s “an assumption most people make” that Palin isn’t well-educated, going so far as to say that “there’s a lot of well-educated people who live in the country…the fact is, she doesn’t want to be one of them.”

Harris eventually veered off in a slightly different direction, saying that while he doesn’t necessarily always understand what Palin is doing or why she’s doing it, that it was uncalled for to act like she was somehow culpable in the tragedy in Arizona. Matthews and McMahon both took exception to this, as they didn’t believe a significant number of people were blaming Palin. frankly, it almost seemed as if Harris brought it up to induce some disagreement, because before he said that, the three were mostly in agreement that if Palin has higher political aspirations, she needs to change her strategy. Video of the segment below.