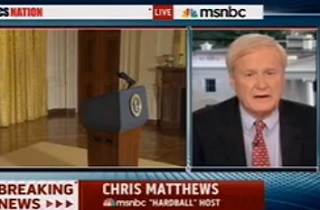 On Wednesday night’s PoliticsNation, while waiting for President Obama to announce the forced resignation of acting IRS Director Steven Miller, Hardball host Chris Matthews went off on a segment of the anti-Obama crowd that Matthews says “want this president to have an asterisk next to his name in the history books,” people like Donald Trump, who “can’t stand the idea that he’s president, and a piece of it is racism.”

Rev. Al Sharpton set Matthews off by asking whether Republicans had overshot the mark by trying to imply that President Obama was involved in the IRS’ targeting of conservative groups, and could it backfire on them?

“I would think it would be justice if it did happen, if they did keep saying that the President was involved in this,” Matthews replied, adding, “they can say, fairly and authoritatively that it’s his job to fix it.”

Matthews then made the case that the Republicans are undermining the “reasonable people, the progressives, the liberals” who believe in effective government.

“The problem,” Matthews continued, “is there are people in this country, maybe 10%, I don’t know what the number, maybe 20% on a bad day, who want this president to have an asterisk next to his name in the history books, that he really wasn’t president,” and seek to nullify his accomplishments. Like a steroid-era baseball player, they want there to be “an asterisk, and they have been fighting for that, the people like Donald Trump, since day one.”

“That is real,” Matthews said, “that sense of racial superiority and rule is in the hearts of some people in this country. Not all conservatives, not even all right-wingers, but it always comes through with this birther crap and these other references and somehow trying to erase ObamaCare, erase his record in history, and a big part of it is bought into by people like John Boehner, who’s not a bad guy, but he knows the only way he can talk to the hard right is talk their language.”

Matthews’ numbers are about right, if you look at polling that was done on the 2008 election. Twenty-two percent of white voters said that race was a factor in their vote, and broke overwhelmingly for white candidates. A recent study by the Associated Press, however, suggests that resentment of black people is much higher than that:

That AP study sought to measure “implicit racial attitudes,” meaning that the subjects might not have been aware of their own resentments. At 56%, that means that at least some of the people who voted for President Obama harbor such attitudes. It’s worth noting that, with regard to the IRS scandal in particular, it hasn’t just been Republicans and conservatives who have overshot the facts; almost the entire mainstream political press leaped to imply that the President was behind the targeting of conservative groups, including the gang that Matthews himself groused with Wednesday morning. To the extent that President Obama has to deal with race-based opposition, it’s not all coming from one direction.