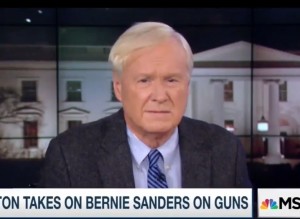 For months now, Democratic primary upstart Sen. Bernie Sanders (I-VT) has been taking hits on his gun control record from frontrunner Hillary Clinton, and even polling blip Martin O’Malley. On the heels of President Obama‘s executive actions and accompanying town hall meeting and op-ed, there has been a concerted effort to place Sanders in the line of fire, as it were, over his record on gun control.

All day, cable news networks have been playing a clip of White House Press Secretary Josh Earnest referencing Sanders at today’s briefing as proof that it was Sanders to whom Obama was referring when he threatened to withhold his endorsement from any candidate “who does not support common-sense gun reform.” when in fact, it was the reporter who brought up Sanders.

The fact of the matter is that while Bernie Sanders has some vulnerability on guns, this narrative is bunk. Those vulnerabilities are in comparison to Hillary Clinton and Martin O’Malley, but President Obama was not warning a guy with three blemishes on a 35 year record, he was talking to people like the Democratic senators who voted against Manchin/Toomey.

That’s not to say that Hillary Clinton shouldn’t exploit that vulnerability, which she did during an interview with Hardball host Chris Matthews Friday night, urging Sanders to “stand up and say I got this one wrong” when he voted to give gun manufacturers immunity from liability claims. She went on to accuse Sanders of not giving a straight answer on the subject, and called on him again to take action on the immunity provision. As the interview wound down, though, Matthews made a damaging and false accusation:

Hillary: And I have raised this issue before standing next to Senator Sanders. He has refused to give a straight answer. He could today introduce legislation to repeal the immunity that was given to gun makers and sellers. I hope he will join me and the President in supporting real change. And that is what I’m looking for.

Matthews: Madam Secretary, I believe he said he will not change his mind on that point. But thank you so much for coming on the program tonight.

Now, Hillary is essentially correct, but Matthews is dead wrong about Sanders’ statements on the immunity provision. While Bernie has not come out and said he got that vote wrong, he has indicated a strong willingness to reconsider. At the first Democratic debate, he tried to defend the vote, but wound up conceding the point when pressed by Martin O’Malley, saying that O’Malley “gave a very good example about the weaknesses in that law and I think we have to take another look at it.”

At the second Democratic debate, Sanders went even further, saying in an exchange with Hillary on the subject “Let’s do more than reverse the immunity,” but stopped short of saying the vote was a mistake because he said he agreed with “parts” of the bill.

Now, part of the reason for Bernie’s vulnerability on this issue, a big part of it, is that he tried to defend it for so long, and has been so slow to come around as far as he has, but there is no fair reading of his statements that says he won’t change his mind. It seems more like he already has changed his mind, and hasn’t found a way to say it.

Before you Hillary or Bernie people start arguing about this, keep in mind that this whole idiotic narrative, that President Obama thinks Bernie Sanders is the problem when it comes to guns, serves only to shift attention away from the lunatic-courting Republicans who decided President Obama’s substantively meaningless executive actions were the worst sort of tyranny before they had even heard them. Yes, Hillary is better on guns, but no, Bernie is not the problem.