Chris Matthews: Tea Party Is Like The Bully In Class Beating Up Kids For The Good Lunch 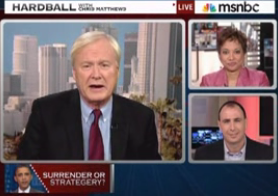 Chris Matthews expressed disappointment with President Obama’s inability to stand up to the Tea Party and wondered whether Obama could potentially fear a primary challenge from his disgruntled liberal base? Jonathan Chait from The New Republic and Cynthia Tucker from The Atlanta-Journal Constitution shared Matthews worry that politically this was not good for Obama, yet on policy, they both seemed to comfort Matthews that actually “it’s not that bad.”

Tucker was most critical of Obama for fundamentally misunderstanding how little control Speaker of the House John Boehner truly had over his caucus, and questioned the wisdom of wasting time negotiating and playing golf with him. She insisted that the Tea Party members of Congress were “irresponsible extremists” and that Obama needed to be a better poker player who simply demanded a clean debt ceiling increase bill. Matthew concluded:

“How is this behavior by the right, any different than the bully in the classroom going up to the kid who got the good lunch and says ‘give me your lunch or I’ll beat you up?'”

The analogy reminded both Tucker and Matthews of tales from their youth and how each confronted their childhood bully. Tucker suggested a bully will keep coming after you until you finally say “no more.” And Matthews offered up his own remedy: nearly choking his bully to death in order to stop “getting trouble” from him. Lesson learned, crossing “give Chris Matthews trouble” off of my “to-do list” for this week