Chris Matthews Tells Morning Joe Republicans Are ‘Into Debt Reduction,’ Democrats Not ‘Serious About The Border’ 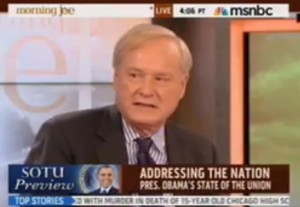 On Tuesday morning’s Morning Joe, Hardball host and Jack Kennedy: Elusive Hero author Chris Matthews was on hand to preview President Obama‘s State of the Union Address, and presumably to offer a viewpoint that differs from that of host Joe Scarborough. When faced with an opportunity to rebut Scarborough’s assertion that Democrats “deny math” by not wanting to gut Medicare and Medicaid, though, Matthews responded by explaining that Republicans are “into debt reduction,” and Democrats will never “get serious about the border,” neither of which bears any relationship to reality.

Scarborough was playing the Beltway version of a good sport by explaining how Republicans and Democrats are on an eternal seesaw, alternating their own states of denial.

“You have Nancy Pelosi going on the air this weekend, Chris, saying ‘We don’t have a spending problem,'” Scarborough said, “and other Democrats talking about Medicare is not a problem. Basically, like Republicans denying science, you know have Democrats denying math, and talking about more tax increases, and playing into a type that helps Republicans.”

On the substance, Scarborough was wrong, House Minority Leader Nancy Pelosi (D-CA) didn’t say “We don’t have a spending problem.” She said “It is almost a false argument to say we have a spending problem. We have a budget deficit problem that we have to address,” meaning that the solution should be balanced between cuts and revenue, and attenuated to current economic conditions.

Additionally, no one is saying “Medicare is not a problem,” we’re saying there are ways to fix Medicare without gutting it. Unfortunately, those solutions don’t appeal to people like Joe Scarborough, and others who will never need Medicare.

On the politics, though, Scarborough is right, because the simplistic and inaccurate ways these issues get framed by the mainstream media do play in Republicans’ favor. Good thing we’ve got “liberal” Chris Matthews on hand to set the record straight.

Or not. “Let me phrase that differently,” Matthews said. “Each party has its reason to exist. If we didn’t have the Democratic party, we wouldn’t have Social Security, Medicare, and Medicaid.”

He gets off to a good start, but then the Agony Booth session he must have undergone in the Morning Joe green room kicks in. “The Republican Party is into debt reduction, law & order in the old days, defense. Democrats really don’t focus on that.”

Again, on the Beltway media-framed politics, he’s right, but Matthews fails to take the additional step of explaining that Republicans don’t actually do anything about deficits, except explode them. Democrats reduce them. Republicans run on defense, but then drag the nation into debacles like Iraq and Afghanistan (which explode the deficit, and continue to drive the debt). Democrats get us out of them, and keep us out. Republicans let Osama bin Laden get away, Democrats kill him.

Matthews goes on to give immigration the “both sides” treatment, advising Republicans to “do enforcement and say, ‘We will make sure no more people will come hopping across the border next week… no more this game of who can get across the border tonight,'” adding, “I think the Democrats will never do that, not in a million years will they get serious about the border or background — what do you call them, work permits. e-verification.”