Chris Matthews To Panel: Given That Obama Could Easily ‘Lose This Thing,’ Will He ‘Up His Game’?
video

Chris Matthews To Panel: Given That Obama Could Easily ‘Lose This Thing,’ Will He ‘Up His Game’? 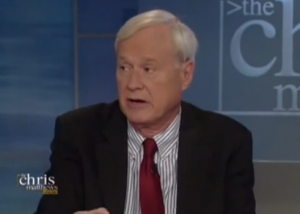 On Sunday, Chris Matthews and his panel took a look at the tough month President Obama‘s had. From bad jobs numbers and losing the Wisconsin recall, to the intelligence leaks and “private sector is doing just fine” remark, it hasn’t been pretty. Given that the race is tight and Obama could lose, Matthews asked, will Obama up his game?

Matthews began the segment by taking a look at how Mitt Romney‘s been “playing it safe” by shaking hands at the rope lines, but not answering reporters’ questions. Kelly O’Donnell agreed that it’s frustrating from the reporters’ perspective, but that he also gains from less visibility because that means there are few changes to make mistakes.

The Washington Post‘s David Ignatius pointed to Obama’s private sector remark, saying we should look at the larger issue at hand. What voters will be asking, he said, is, “Is Barack Obama a strong president? Does he have it in him to really lead the country?”

That led Matthews face the facts and ask the following question: “Given the reality that this election could easily go the other way for Obama — he could lose this thing, forget about the numbers right now, it’s going in that direction — will he up his game?”

“I think so,” Ignatius said. Obama knows how to meet challenges, and he’s going to have to meet this one. He has to convince people of his leadership capability, much like he did in 2008. “This is a proud guy,” he said. “And he’s not going to go quietly.”