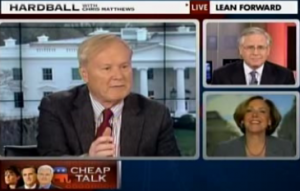 Chris Matthews reacted to criticism from Mitt Romney regarding President Obama’s action in Libya. Romney attacked Obama for being “tentative, indecisive, timid and nuanced.” Matthews laughed at the term “nuanced” being used derisively and thought many of the likely Republican candidates for President were being hypocritical.

Joan Walsh and Howard Fineman joined the discussion as Matthews wondered whether Romney just has an “automatic Pez dispenser of these little things that come out of him, that simply are another chance to kiss the far right butt?” Fineman tried to describe Romney as “a guy in pressed blue jeans trying to act cool,” but never eager to be outdone in the funny analogy department, Matthews instead compared Romney’s efforts to court the far right being as uncomfortable as watching “Al Gore doing the Macarena.”

After a clip played of Romney, during the Bush Administration, suggesting that “politics ends at the water’s edge,” Walsh suggested Romney’s current criticism of a Democratic president during wartime is just another example of Romney’s many flip-flops. Matthews even suggested Romney was demonstrating “white collar birtherism” by questioning Obama’s loyalty to America.

Most surprising though was Matthews admitting he’s “being charmed” lately by Republican Governor Haley Barbour after he said “this is not the time to critique what the administration has done or will do.” Could that be a kiss of death to Barbour’s chances with Republican primary voters? However, to close out the segment, Matthews returned to the rhetoric of Romney and Newt Gingrich and asked “can’t they hear themselves in the echo chamber of BS they live in?”