Chris Matthews: “We’ve Got A Government That Looks Impotent In Front Of The Oil Industry” 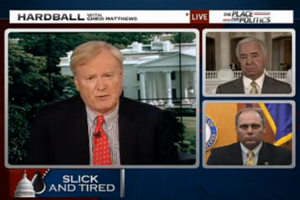 Chris Matthews is really losing his patience with the response to the BP Gulf of Mexico oil leak. While the early days of the oil leak saw Matthews’ anger directed mostly toward Dick Cheney and former FEMA director Michael Brown‘s cameo appearance in the news, he is now turning on the Obama administration, calling it “impotent” and demanding the know why Congress could not break the cozy relationship between overseers and oil companies.

Congressmen Nick Rahall and Steve Scalise were his guests on the show, and they had to deal with quite a testy Chris Matthews (though thankfully, not so much at them as at government overseers). To Rahall, Matthews asked “Do you work on the MMS [Mineral Management Service] so you can prep yourself and get free tickets, free sports tickets, and meals or something, so you could move on and apply for a job in the oil industry? In other words, you’re going to suck up to those guys on your way to a nice job. That’s what it looks like.” Rahall could only stoically reply that, yes, “unfortunately, that has occurred,” but “can we legislate purity? Heavens no, we can’t!”

Scalise didn’t get as much of a rhetorical question as a pained extended comment on the Gulf oil spill tragedy:

“I am like everybody else watching out north american continent get destroyed… this is bigger than anything that has happened in American politics for years. We’ve got a government that looks impotent in the face of the oil industry. It looks like BP has a business challenge and the American people are watching it meet its business challenge while they’re destroying out continent.”