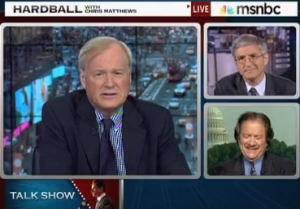 Chris Matthews still didn’t understand what all of this “sexting” business involved, and asked his guest Joe DiGenova, a former Independent Counsel, whether Congressman Anthony Weiner would be in as much trouble if he was involved in a “real” sex scandal? DiGenova suggested Weiner cannot escape the pictures and also offered a few other reasons why no Democrats seem eager to jump to Weiner’s defense.

“Supposed this was just a Congressman who had a lot of girlfriends. . . . No virtual use of electronic equipment, no e-mails, no Twitters, no weird conversations on the phone or on anything, no phone sex – the real kind of sex. Would that be at all an ethics issue? Let’s be blunt.”

DiGenova explained that the photos are by far the worst part of the story, but also the fact that Weiner was a “nasty, arrogant, vicious attack dog” helps to explain why he has few supporters. Then echoing the opinion of Donald Trump, DiGenova concluded “this guy has a very serious psychological problems,” as evidenced in the past by his angry public outbursts at his staff.

Matthew was amazed that Weiner’s “avatar sex” was his downfall, since unlike a Tiger Woods, “here’s a case of a guy that just seemed to like [being an] exhibitionist” and liked sharing his photos. And for those keeping score at home, Matthews reading some of Weiner’s “sext messages” was eclipsed ever so slightly in the awkwardness department by this strange reference to “avatar sex.”