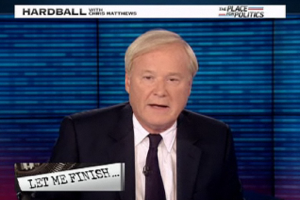 With the midterm elections rapidly approaching, the fixation on the Republican Party’s chances for a comeback are evolving into speculation over the future of the GOP should the Tea Party make a serious indent on their collective persona. In light of this, Chris Matthews argued Friday night that the GOP’s biggest problem will not be President Obama or the Democrats, or even the Tea Party candidates themselves, but what to do about Sarah Palin, the candidate.

“There’s no doubt in the world that she… carries tremendous clout when she endorses candidates,” Matthews conceded. But for the Party, that may not be the greatest thing, he argued, because “the person now leading the party in terms of popular influence can’t pass muster with the party’s established leaders.” Meaning: she doesn’t have the credentials to fill the shoes she’s currently wearing.

Matthews continued, wondering whether other potential 2012 candidates would feel comfortable endorsing her: “Ask Mitt Romney: does he really think deep down Sarah Palin has the right stuff to lead this country?” And as for the entire party itself, he presented them what he believes is the key to their success with her as leader:

“Do they buy all this talk of hers that all America needs in this second decade of the 21st Century are common sense conservative solutions? That a regular person with regular off-the-shelf answers can deal with the tricky, complex questions of economics, science, and international relations now before the country?”

And if they don’t believe this, he concluded, “how can you win the love of the Tea Partiers if you don’t believe in the presidential ability of their hero?”

Matthews comments from last Friday’s Hardball via MSNBC below: