Matthews: Worst About Obama? Hasn’t Been Able To Fix A Bad Economy He Inherited 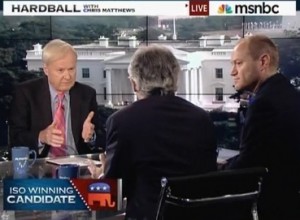 Chris Matthews analyzed the Republican presidential candidates with David Corn and Republican strategist Todd Harris, admitting he still didn’t understand some of them and wondering whether Mitt Romney is truly the front-runner? Although he spent some time dismissing Texas Governor Rick Perry as a “hee-haw, far right-winger,” Matthews was more interested in defending President Obama against some of the exaggerated attacks coming from Romney.

Matthews summarized a recent exchange between representatives on behalf of Romney and Obama. From Team Obama, David Plouffe said “Gov. Romney has reminded us that he’s a world-class political contortionist. He’s kind of been all over the map on the president’s leadership on the economy.” Team Romney, did not pass on the opportunity to get in a one-on-one showdown with their hopeful general election opponent as Romney’s campaign manager Matt Rhoades responded:

“We understand the difficulty of working for a president who is challenging Herbert Hoover’s place as the greatest job terminator in U.S. history. Mr. Plouffe has our deepest sympathies. If he’d like his candidate to discuss real issues, Mitt Romney will debate President Obama any time, any place.”

Matthews thought the comparison of Obama to Hoover was ludicrous:

“Excuse me, Herbert Hoover created the Great Depression on his watch. He didn’t just inherit it from somebody else. This guy, Obama, the worst thing you can say about him is he’s inherited the worst economic situation in America and hasn’t been able to fix it.”

Harris attempted to argue Obama actually has made the economic situation worse, yet Matthews was adamant that mentioning Hoover is just over-the-top. Harris then sarcastically responded, “on this show there’s never hyperbole and rhetoric,” and to Matthews’ credit he accepted the critique and joked back “that’s a big word for this show.”