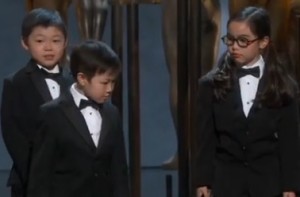 Host Chris Rock may have tackled racism head-on while hosting the 88th Academy Awards Sunday night, but many viewers were upset when he made a joke that stereotyped Asians.

Rock announced that that Price Waterhouse Cooper had sent over “their most dedicated, accurate and hard working representatives,” only to reveal three young Asian children wearing suits and holding briefcases. “If anybody’s upset about that joke, just tweet about it on your phone that was also made by these kids,” he joked.

Rock’s wish was their command.

Half-assed Asian joke, #Oscars, and then preach about diversity? #LoseMe

Hey Asian kids, so you’ve never seen an Asian actor nominated in your lifetime, but maybe one day you can be a prop for a shit joke. #Oscars

Think my brain shut down for a few minutes. Did that appalling joke about Asian kids actually happen? #Oscars

If the #Oscars is dedicated to improving diversity, we need to talk about that crude Asian joke. https://t.co/0OwZeFagsb

Ali G, fine, unpredictable. But the @chrisrock joke w/ #Asian kids definitely went thru rounds of approval. How does that get thru? #Oscars

There was a horribly tone-deaf Asian joke at the #Oscars: https://t.co/VYj2ctOUBV pic.twitter.com/s6w5efui8n