Chris Wallace Confronts Christie: You’ve Had Your Own Email Problems 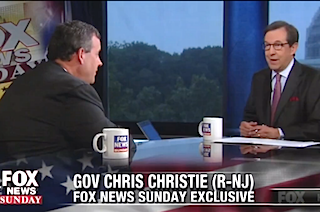 According to Fox News’ Chris Wallace, Hillary Clinton might not be the only 2016 candidate with email issues. “You’ve had your own problems,” the host reminded Chris Christie Sunday morning.

Wallace noted that at “the height of the Bridgegate scandal,” it turned out that 12 text messages sent between the New Jersey governor and one of his top aides had been deleted. And, in addition, Christie had conducted government business on a private Yahoo account, which goes against state regulations.

“My government business was conducted on a government email account,” Christie insisted, saying that any business emails that came to his private account from his staff were sent “inadvertently.”

“So let’s all remain calm,” Christie said. “We cannot compare that, can we, to someone having a private email server in the basement of their home, where they did all of the government business on their private email server in their basement,” he continued, referring to Clinton. “We can’t compare that to have national security secrets, we’re really not, Chris, are we? Comparing a press release to having national security and classified documents running through a server that’s not protected by the federal government?”

“We’re really not comparing the fact that she’s wiped away tens of thousands of emails that had relevant information on them because she just believes she’s entitled to do that?” Christie asked, growing more indignant. He called his administration in New Jersey an “open book” and asked, “Can you hold Mrs. Clinton to that standard?”