Chris Wallace Defends His ‘Gotcha’ Questions To Newt Gingrich: ‘Welcome To The NFL’ 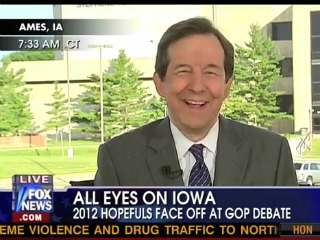 Fox News Sunday anchor Chris Wallace paid a visit to Fox & Friends, where host Gretchen Carlson kicked things off by asking him about the tough questions he posed to candidates during last night’s GOP debates in Iowa.

“Our email machine’s on fire!” she announced (You guys… Email machine). “How do you respond to some people who are a little upset with you that you might have been a little testy — their words, not mine.”

Wallace laughed at the question.

Listen, I have to say one thing about Fox & Friends: You know when you come home from a party and you find out that you’ve had a piece of spinach between your teeth the entire night? Leave it to Fox & Friends to put up a big picture of my front teeth with the spinach in between them.

Welcome to the NFL! I mean, the fact is we’re talking about presidential politics. It isn’t beanbag. The fact is that politicians are running for president, they’re taking shots at each other; we’re asking tough questions, probing questions. If the politicians decide they want to take shots at us, we’re fair game as well, so it’s all part of the game.

Talk then turned to Newt Gingrich, whom, the folks at Fox & Friends noted, may have “won” the debate because of how he handled The Media. Wallace reiterated the question he’d asked Gingrich:

Yeah, real quickly, what I asked the speaker was… You know, one of the ways we judge candidates is the campaign they run, and I pointed out that his entire national staff and his Iowa staff walked out on him because they said that he was undisciplined about campaigning and fundraising, that at last report he’s a million dollars in debt.

Wallace then made a good point: While candidates might not enjoy that he asks “tough” questions, things will only grow more difficult when they face off against Democrats next year. Besides, Wallace’s assertiveness and frankness in his questioning helps undermine other media outlets’ criticism that Fox News merely acts as a “mouthpiece” for the Republican Party.

Watch the clip for yourselves, via Fox News: