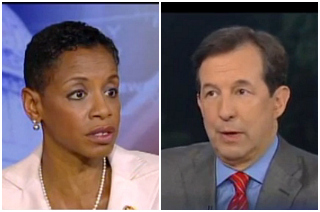 “We’re not one trick ponies,” she continued. “We’re able to focus on a range of different things. If you just look even in these last two weeks, the debate in this Congress has been about things like: do we provide for food and nutrition, do we address issues of poverty, are we going to make sure we have an education system that works for all of our young people so that they can succeed? And to the president’s call, are we going to address the laws that actually contribute to the problems of our cities?”

RELATED: Kirsten Powers Battles Fox Panel: Right ‘Obsessing’ About Black Crime So They Can ‘Stick It To Black Community’

“I grew up in the inner city and had an opportunity to experience a lot of the problems that were there,” Carson said. “Many of those problems were the result of the environment people grew up in and the philosophies people develop. For instance, in inner city communities, if it’s late at night and you’re walking along and somebody starts following you, that’s a serious issue and you know that immediately. And you go into a fight or flight mentality. That may not happen walking in a gated community in Palm Springs—”

Edwards objected to this argument that racial profiling was all in the minds of people raised on inner city violence.

“You really cannot ignore the fact that our young black men are in fact profiled,” she said. “I have a young man who works for me. He’s a college graduate. Three times in this last month he’s been stopped by law enforcement going to work. This is a reality.”

Carson repeated several times an injunction to “tone down the rhetoric” on race and violence. “So often we take any kind of situation that occurs today in America and we get on the different sides of it and we hurl hand grenades at each other rather than engaging in intelligent discussion,” he said.

Edwards had little tolerance Carson’s calls for civility instead of policy changes. “Dr. Carson, really, there are deep systemic problems that really impact African Americans in the system that have to be addressed,” she said. “I’m going to acknowledge just like anyone else that not everything is about race, but there are some things that are. We have to acknowledge those and we have to make the systemic changes that are important to advance all of our communities so that people really can enjoy those benefits that, frankly, Dr. Carson has enjoyed.”