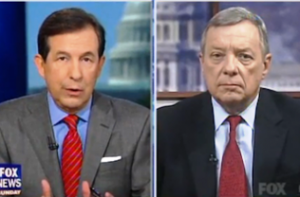 “Why single out Crossroads,” Wallace asked, “when you didn’t mention a single liberal group, when there were a bunch that were applying for tax exempt status at exactly that point with the name ‘progress’ in their name?”

I can tell you flat out why I did it. Because that Crossroads organization was boasting about how much money they were raising as a 501 (c)(4). Let’s get back to the basics. Citizens United really unleashed hundreds if not thousands of organizations seeking tax exempt status to play in political campaigns. The law we wrote as Congress said that they had to exclusively be engaged in social welfare, and not politics and campaigning. So here’s the IRS trying to decide whether or not these organizations really comply with the law. Crossroads was exhibit A. They were boastful about how much they were raising to beat Democrats.

“Because we’re now in the mess that we’re in because of political targeting,” Wallace pressed, “why not send a letter that says ‘go after any group of any political persuasion’? Why not refrain from singling out a conservative group and never mention any liberal groups?”

“Karl Rove was making these boasts,” Durbin said, “saying he was going to raise so much money, millions of dollars. I knew that if they went in to investigate this group, every other group would be put on notice.”

Durbin hedged at the end of the exchange. “I’ve also said from the beginning, Chris, there is no basis for targeting within the IRS. All groups needs to have the law applied to them equally. In this situation Karl Rove was front and center and proud of it, and that’s why I mentioned his organization.”