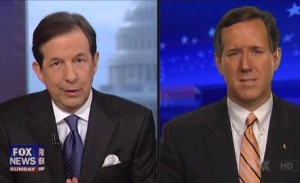 On Fox News Sunday today, Chris Wallace brought up Rick Santorum‘s strong opposition to birth control, including his past comments that taking birth control gives people a license to engage in a sexual lifestyle that is not “how things are supposed to be,” and asked the Republican candidate how why he is so passionately against something that is used by a significant number of women in the United States.

Wallace asked Santorum if contraception is something the Republican party should be taking on as an issue in 2012, given public steps being taken against it like the Blunt amendment last week. He noted that if the amendment had passed, any insurer could choose not to cover birth control. Santorum insisted it was much broader than that, covering a whole list of services, with Wallace noting that birth control is surely one of them. Santorum argued that the idea of a conscience clause should not be a controversial one, because preserving people’s personal religious liberties is a strongly American concept.

That’s when Wallace brought up Santorum’s personal beliefs on birth control, and cited a statistic from the CDC saying that 99 percent of women between ages 15-44 have used birth control at some point in their lives. Given that statistic, Wallace asked Santorum if he really believes they are engaging in practices outside of “how things are supposed to be.” Santorum said he’s just reiterating the position of his church. He found it personally amazing how siding with the church makes one “out of the mainstream” these days.

Wallace shifted the focus to good works and charity, and compared one statistic in Santorum’s tax returns to the monetary beneficence of Mitt Romney and President Obama. Whereas both Romney and Obama have given around 14 percent of their income to charity, Santorum gave less than 2 percent in 2010. Santorum explained this was because he needed to prioritize the needs and health of his young daughter, but Wallace noted Santorum has given around 2 percent for the past several years.

Turning to a more contentious issue for Santorum, Wallace brought up the candidate’s comments that Obama is a “snob” for wanting to send everyone to college. Wallace played a clip of what Obama actually said, and then highlighted a selection from his website when he was running for reelection to the Senate in 2006. Wallace pointed out that what Santorum has been saying on education is not that different from what Obama’s been saying. Santorum justified the discrepancy thusly:

“Maybe I was reading some things that… I’ve read some columns where, at least it was characterized that the president said we should go to four-year colleges. If I was in error on that, I certainly… if you say you haven’t found that, I’ve certainly read that. If it was in error, then I agree with the president.”

RELATED: Santorum Doubles Down On Education Remarks: Liberal ‘Indoctrination’ Is Encouraged At Many Colleges

On the issue of No Child Left Behind, although Santorum says he has come to seriously regret the vote, Wallace brought up another selection from Santorum’s 2006 website, where he touted his support of the legislation as “the most historic legislative initiative enhancing education opportunities to pass Congress in decades.” Santorum said it was not until the end of George W. Bush‘s second term that he started to witness a huge increase in education spending.