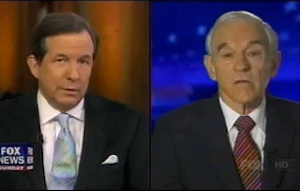 On Fox News Sunday, Chris Wallace grilled Republican hopeful Ron Paul over passages in his 1987 book Freedom Under Siege, in which he had wrote “The individual suffering from AIDS certainly is a victim – frequently a victim of his own lifestyle – but this same individual victimizes innocent citizens by forcing them to pay for his care,”, Wallace asked if Paul still felt that way.

“I don’t know how you can change science,” Paul responded. “Sexually transmitted diseases are caused by sexual activity. That’s been known for some 400 or 500 years, how these diseases are spread. If a fault comes with people because of their personal behavior, and in a free society people do dumb things, but it isn’t to be placed as a burden on other people, innocent people. Why should they have to pay for the consequences? That’s a sort of a nationalistic or socialistic attitude.”

“Do you think someone with AIDS should not be entitled to health insurance as opposed to someone who has a heterosexually transmitted disease?” Wallace interjected.

“No, I never said that,” Paul retorted.

Wallace continued pressing the Congressman on the statements in the book.

“There shouldn’t be a law that says they’re denied that,” Paul answered, but defended his assertion that people’s personal lives should play a factor in determining insurance. “The markets should handle this…If people are smokers, don’t they have to pay more? Sometimes you get your insurance cheaper if you are a nonsmoker. Let the market sort this out but not have dictates by the government saying thou must do this and your behavior doesn’t matter. If you drink too much you suffer the consequences. Same way with health matters. You don’t have the right to demand someone else take care of you because of your habits.”

Wallace also brought up another passage from the book in which Paul wrote “Why don’t they quit once the so-called harassment starts? Obviously the morals of the harasser cannot be defended, but how can the harassee escape some responsibility for the problem? Seeking protection under civil rights legislation is hardly acceptable.”

“You have to have a better definition of harassment, if it’s because someone told the joke and someone was offend happened they don’t have a right for the policeman to come in and put penalties on the individual,” Paul explained. “If there’s any violence involved, you still don’t need a federal law against harassment, you just need to call a policeman and say there’s been an assault! But (because) people are insulted by rude behavior, I don’t think we should make a federal case about it, people should deal with it at home.”

Watch Wallace grill Paul over passages from his 1987 book below via Fox News: