Chris Wallace Grills Sen. Schumer On Fiscal Cliff Negotiations: ‘What Are You Guys Willing To Put On The Table?’ 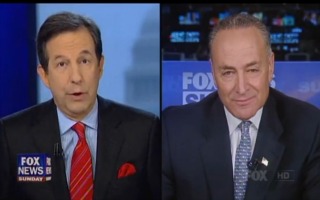 Senator Charles Schumer (D-NY) sat down with Fox News Sunday‘s Chris Wallace this week where he was grilled about the specifics of President Obama‘s fiscal cliff plan in the face of diminishing Republican opposition to raising tax rates. Wallace asked Schumer repeatedly what Democrats were willing to offer in the situation where Republicans agreed to “raised taxes all the way up to Clinton rates,” and Schumer responded, “Bottom line, Chris, is that would be negotiating against ourselves.”

Senator Bob Corker (R-TN) was also a guest on the show and told Wallace that he would be willing to consider raising rates. Schumer shot back, “Speaker Boehner hasn’t said that,” and went on to note that, in his view,, in 2011, Democrats had offered a balanced deal, with both revenues and spending cuts, but never received a compromise. According to Schumer, Democrats took a large step in the current fiscal cliff negotiations by offering a plan how to raise the first 1.2 trillion dollars in revenue, along with 1 trillion dollars in cuts. Wallace pressed on, asking, “Can you give us some specifics of things that you would consider cutting both in terms of social programs and in terms of entitlements?” Schumer claimed that Republicans were the ones stalling the deal and said, again, “It makes no sense to negotiate against ourselves.”

Corker discussed the changing leverage of the Republican party and told Wallace, “I think Senator Schumer and I both know that we need to solve this problem.”