Chris Wallace Hits Back: Since Her Attack On 9/11 Widows I Stopped Paying Attention To Ann Coulter
video

Chris Wallace Hits Back: Since Her Attack On 9/11 Widows I Stopped Paying Attention To Ann Coulter 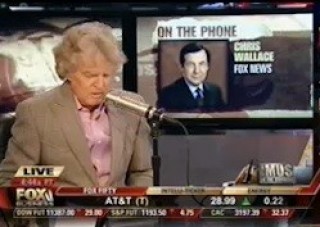 On Thursday’s Imus In The Morning, Chris Wallace responded back to Ann Coulter‘s attack on him by saying, “You know, ever since Ms. Coulter attacked the 9/11 widows and said they were self-promoters, who were enjoying their husband’s death on 9/11, I stopped paying attention to her.”

Coulter had taken umbrage at Wallace’s question to Santorum, where he had asked the former Senator if he agreed with the following quote: “The army is not a sociological laboratory. Experimenting with policy, especially in a time of war, would pose a danger to efficiency, discipline and morale and would result in ultimate defeat.” Santorum said he “roughly” agreed with it and Wallace revealed the quote’s source to be Colonel Eugene Householder who argued against racial integration of the military.

“I thought it was an outrageous question, I thought Juan Williams should have punched Chris Wallace in the face for saying that when he came on in the same half of the program,” Coulter commented, adding that she was “sick of people comparing gays to blacks.” “You can see that someone is black; you can’t see whether someone is gay.”
Watch below via Fox News:

Imus said that he felt Wallace had “sandbagged” Santorum with the question “comparing civil rights to gay rights.”

“I don’t think so,” responded Wallace. “And I also didn’t do what you said. That I was comparing civil rights movement of blacks to gay rights. What I was struck by — look, what struck me, I was sort of the moderator of the debate and didn’t get a chance to follow up because of the rules of debate in Orlando, where the gay soldier had that video and said are you going to reinstate Don’t Ask Don’t Tell.”

“…All the point i was making with Senator Santorum, the question I was asking him about, was the thing that he objected to it’s a social experiment, break cohesion, and people don’t want to live next to each other.” Wallace added. “The argument he’s making straight shouldn’t live next to gays in the military was exactly the argument used in the 1940’s in regards to racial integration. That’s the only comparison.”

Imus said he thought Wallace was right and Santorum was an idiot. “Incidentally, in all seriousness, it’s a great show, but it diminishes your show to have bigoted idiots like Rick Santorum on. Stop doing it.”

Watch Wallace’s interview with Imus below, via FBN: