Chris Wallace: Republicans ‘Squandered’ Shot At Senate, Asks If They ‘Have A Tea Party Problem?’
video

Chris Wallace: Republicans ‘Squandered’ Shot At Senate, Asks If They ‘Have A Tea Party Problem?’ 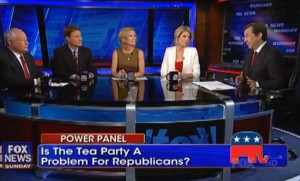 Political pundits continue to examine the aftermath of Tuesday’s Election Day victories by President Obama and the Democrats, and while Chris Christie, Hurricane Sandy, and Fact-Checkers have all had their turn in the barrel, Fox News Sunday anchor Chris Wallace wondered if some of the blame rests with 2010 “it” group The Tea Party. On Sunday morning’s program, Wallace noted that “this is the second election in a row where, it is fair to say, Republicans squandered a really good chance to take over the Senate.”

“I mean, by all mathematical rights, “Wallace explained, “they only had ten seats to defend. Democrats had 23. Because they nominated people, who were strong enough to win in primaries but too out of the mainstream to win in general elections, does the Republican Party have a Tea Party problem?”

Laura Ingraham chimed in to defend the Tea Party, pointing out that similar blame was laid on “the far right” in 2006. “We had some bad candidates, Richard Mourdock, but how did Scott Brown lose in Massachusetts, and how did we lose the North Dakota Senate seat? Because of the Tea Party? If it wasn’t for the energy they brought to the fore, Republicans would be in a disaster now. It doesn’t mean they don’t have to nominate great people, they are good about that but the Tea Party, how many times can they be blamed for moderates losing seats?”

Ingraham is correct that, on balance, the tea Party wave in 2010 has been a net positive, timed as it was to allow the Republican gerrymandering that allowed them to retain control of the House this time around, but there is also a persuasive case to be made that the Tea Party created an atmosphere that made it tough for moderates to actually run as moderates. In much the same way, Kristol’s diagnosis of an equal Republican establishment problem fails to factor in the degree to which the Tea Party wave may have pulled that establishment too far to the right.