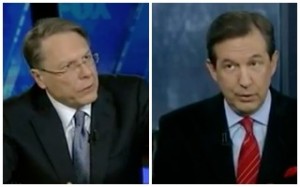 Wallace began with background checks, citing the 1.7 million people who’ve been denied because of the checks — but LaPierre argued that most of those people weren’t prosecuted, and we can’t say they “were stopped from getting a gun at all.”

He further argued against calling them universal. “It’s a fraud to call it universal,” LaPierre said, because criminals won’t comply. Thus it’s more apt to call it a “universal check into a universal registry of law-abiding people.” And it will only create a “bureaucratic nightmare.”

“If you limit the American public’s access to semi-automatic technology, you limit their ability to survive,” LaPierre said.

The interview got particularly heated when the topic turned to school security and armed guards. Wallace pressed LaPierre on his advocacy of armed guards at schools, noting that those who are motivated to kill will go to other places like movie theaters and malls. Yes, LaPierre said — and that’s why we need to enforce the laws already on the books.

On that note, Wallace brought up the NRA’s controversial ad featuring the First Daughters, asking whether he regretted it. It wasn’t about them, LaPierre said. “The president’s kids are safe, and we’re all thankful for it.”

Wallace noted that all schoolchildren don’t face the same threats as the president’s children.

“Tell that to the people in Newtown,” LaPierre said. “Unfortunately, I think there are parents all over the school that think, all over the country that think their kids are entitled to the same amount of protection when they go to school.”

“You really think that the president’s children are the same kind of target as every school child in America?” Wallace said. “That’s ridiculous and you know it, sir.”

Wallace additionally pointed to LaPierre’s class argument — that so-called elites are able to afford armed security. He pointed out that LaPierre has security too, asking if that makes him an out-of-touch elite.

“We’ve had all kinds of threats coming to us,” LaPierre said. “I don’t deny anybody the right to security when they need it. What I am saying is, it’s ridiculous, Chris, for all the elites and all the powerful and privileged, the titans of industry to send their kids to schools where there is armed security, to have access to semi-automatic technology.”

The idea of an elite class, Wallace said, is “just nonsense.”