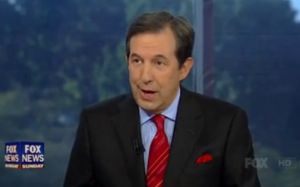 On Fox News Sunday, Chris Wallace spoke to Romney adviser Ed Gillespie about the Romney campaign’s tax plan. The pair sparred over the campaign’s lack of details — and Wallace went on to deem the studies that support the plan “questionable.”

During the debate, Wallace said, Paul Ryan provided no additional specifics about the tax plan. He’s said we should leave the matter up to congressional negotiation.

“Why is it all right to tell voters about the candy [the 20-percent across-the-board tax cut]…but let’s not tell them about the spinach, which is, you’re gonna lose some deductions?” Wallace asked.

Gillespie said they have discussed deductions, and said they can’t start negotiating “in a campaign environment.” Gillespie further defended the math, saying, “Six different studies have said this is entirely doable.”

Wallace deemed some of those studies “questionable.”

One of them “is a blog from a guy who was a top adviser to George W. Bush,” Wallace added. “So there are hardly nonpartisan studies.”

Gillespie argued that Harvard and the American Enterprise Institute, among others, “are very credibly sources for economic analysis.”

“You wouldn’t say that AEI is a conservative think tank?” Wallace asked.

“I would say it is a right-leaning think tank,” Gillespie replied. “That doesn’t make it not credible.”

Gillespie disagreed:
It does make it nonpartisan. It is not a partisan organization, I can tell you, there are many instances where there have been things AEI came out with and said, I didn’t find it to be necessarily to be helpful to the Republican Party.

“Would you say Brookings Institution is nonpartisan?” Wallace asked. Gillespie said he would call it “left leaning” and “nonpartisan.”