Chris Wallace To Newt Gingrich: If You Live In A Glass House Maybe You Shouldn’t Throw Stones? 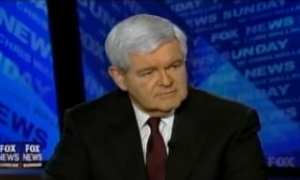 In addition to being frustrated with the White House, Chris Wallace interviewed likely Republican candidate for President Newt Gingrich and showed no mercy. Suggesting the excuse that Gingrich previously provided for his marital problems was “kinda lame,” Wallace asked, “you love your country and you’re working hard and so you strayed. That wouldn’t work with my wife?”

Gingrich recovers somewhat smoothly, saying that he hopes voters will realize he has matured and that instead they focus on who best could solve America’s problems. Yet Wallace persists, wondering how it could not have been hypocrisy for Gingrich to lead the charge for President Bill Clinton‘s impeachment, when he himself was having an affair at the same time? With the interview growing more tense by the moment, Gingrich insists his actions were not hypocritical since Clinton perjured himself in federal court, and that no leader should be above the law.

Wallace, not yet satisfied with the answer, concludes by questioning Gingrich “man to man” about whether he ever stopped to think “I’m living in a really glass house, maybe I shouldn’t be throwing stones?” Yet Gingrich thinks, regardless of what material his house is made of, if he didn’t call for Clinton’s impeachment, then he should have resigned for not being able to do his job properly. Gingrich argues that he is not perfect, but that one doesn’t need to be perfect to be a good leader and that he is willing to take a “tough beating” from Wallace and others in order for the potential opportunity to be a leader again.