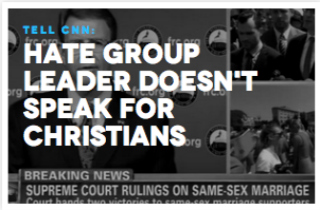 A Christian group has obtained more than 33,000 signatures for a petition demanding that CNN cease putting Family Research Council chief Tony Perkins on its airwaves with his “anti-gay” views.

The group, Faithful America, describes itself as a “community dedicated to reclaiming Christianity from the religious right,” refusing to “sit by quietly while Jesus’ message of good news is hijacked to serve a hateful political agenda.” As such, one of their causes is to put an end to the cable news outlet’s use of Perkins as a “voice for Christian causes.”

“Even as church bells rang out to celebrate a victory for equality,” the petition reads, “CNN once again turned to a hate-group leader to speak on behalf of America’s Christians. Tony Perkins doesn’t speak for us, and CNN needs to stop giving him a platform to spread anti-gay hate.”

The group laments that “CNN host Wolf Blitzer failed to challenge Perkins’ lies” in a segment about the Supreme Court’s overturning of the Defense of Marriage Act. “[N]or did [Blitzer’s] segment feature any Christian leaders with a different point of view — despite polls showing that a majority of Christians actually oppose [DOMA].”

The plea concludes: “With America moving decisively towards full equality, it’s time for CNN to stop portraying Christians as voices of anti-gay hate.”

Originally the petition sought 15,000 signatures, but it has more than doubled that amount, garnering more than 33,600 signers since its posting nearly three weeks ago. Though CNN’s use of Perkins has led to this particular petition, the FRC head has also appeared on Fox News and MSNBC in the past.

No word on whether CNN will respond to the petition’s specific request.