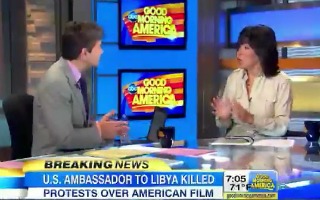 Riots in the North African nations of Libya and Egypt on September 11 have left several Americans dead, including the United States’ Ambassador to Libya, Chris Stevens. Today, some members of the media are opting to make a moral equivalency between the rioters and the free speech rights in the United States which may have inspired them.

Appearing with George Stephanopoulos on ABC’s Good Morning America, Christiane Amanpour related what she knew about the filmmaker responsible for the movie which sparked riots across North Africa and cost the lives of at least three Americans.

Amanpour said that the movie depicts the Islamic prophet Mohamed as a thug and a pedophile and “generally denigrated Islam,” as was the filmmaker’s intention:

“There is obviously freedom of expression in this country. There is also a 100-year-old law by the United States Supreme Court which says you can’t cry fire in a crowded theater,” said Amanpour. “So, now one has to figure out the extremists in this country and the extremists out there who are using this and whipping up hatred.”

Amanpour’s husband, James Rubin, appeared on CNN on Wednesday morning where he echoed his wife’s sentiments:

“We know there are limits to free speech, the classic being you can’t yell fire in a movie theater,” said Rubin. “So figuring out how hateful speech is treated by our government, so people around the world don’t see, in an unsophisticated way, something coming out in America and thinking ‘well the U.S. government could have stopped that’ when we can’t stop that.”

The consequences applied to defamatory or dangerous speech are necessary, but the oft-cited movie theater example does not apply to this circumstance. Of course, you can yell ‘fire’ in a movie theater if there is a fire. It is the intention behind that statement that determines whether a crime has occurred. Furthermore, at no point are the theater-goers at liberty to rise up and murder the alarmist.

What may have been a stronger point for Rubin and Amanpour to make would be to cite examples of speech made with the intention to incite violence. Than the debate would have been over whether the movie in question – vile as it is – is an incitement to riotous violence and justifies the assassination of an American foreign ambassador and his staff. I know where I would stand if that was the argument, but at least the debate would have been appropriately framed.

The filmmaker’s intention was surely to be provocative and he succeeded wildly. To suggest, however, that the Egyptians and Libyans who launched a murderous riot over the film are merely the equivalent of a crowd fleeing for their lives is to absolve them of their obligation to reason. To suggest that the rioters had no control over their actions and were stirred into an uncontrollable frenzy strikes me as the height of patronization.

Countless billions of American foreign aid dollars have flown into Egypt since the presidency of Sadat. It was American armaments that helped deliver Benghazi to the Libyan rebels and eventually brought down Gadhafi. Americans have a right to be perturbed by how their generosity is repaid. They most certainly have a right to be angry – to try to frame the rioters as children whose actions were beyond their control veers dangerously close to a justification of their actions.