Christie On Bridgegate Reporting: ‘Nobody Has Said I Knew Anything Before it Happened’ 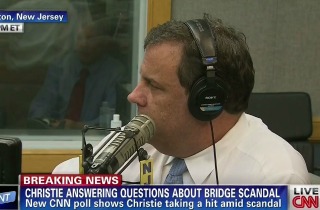 New Jersey Gov. Chris Christie appeared on New Jersey 101.5, WKXW-FM, on Monday night where he attempted to correct the record set by some media outlets like the New York Times, which recently published a claim by a former aide suggesting that the governor was aware of the closure of two lanes of the George Washington Bridget for allegedly political reasons. Christie said that, not only did he ever know about those lane closures before they occurred, but that no one has yet accused him of that.

“The most important issue is, did I know anything about the plan to close these lanes?” Christie asked. “And the answer is still the same: it’s unequivocally no. And, in fact, no one’s ever accused me of that.”

Christie asserted that the first time he became aware of the lane closures were when emails linking his appointees to that scandal were released to the press and published.

“I know, prior to that, that there were press accounts about traffic issues up there,” Christie added. However, he said that, even if his staff had brought those issues to his attention, “it wouldn’t have been meaningful to me.”

Christie added that, contrary to recent reports, “nobody has said” that he was aware of those lane closures before they had occurred. “And I think that’s the most important question,” he said.

The governor was asked about an ongoing investigation into the nature of those lane closings. He insisted that he has been producing documents “on a rolling basis” to the legislature, but he has not seen those documents.