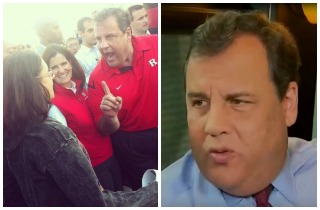 New Jersey Gov. Chris Christie found himself in hot water this week after reporters captured him arguing with a public school teacher on the campaign trail. Christie reportedly told the teacher that he is “tired of you people.” The quote was accompanied with an image of Christie aggressively pointing his finger in the teacher’s face. On Tuesday, in an exclusive interview with CNN host Jake Tapper, Christie opened up about that incident.

Tapper asked about the altercation with the teacher that exploded on the internet and probed the New Jersey governor about whether he has any “second thoughts” about how he handles some situations.

“The photograph of this big strong governor berating a poor little teacher as some might see it,” Tapper said, “could be counterproductive to what you want to achieve.”

“First is that whole incident as an incident was mischaracterized and overdramatized by the teacher who belongs to a portion of the teachers union,” Christie replied.

“Are there times I wish I would have said something? Sure,” he continued. “But what I think people see in me is that I’m genuine.”

“I’ve apologized at times to folks for things that I’ve said that I thought went over the line, and I’m sure that will happen again in the future,” the governor concluded. “But they never have to wonder what I’m thinking.”