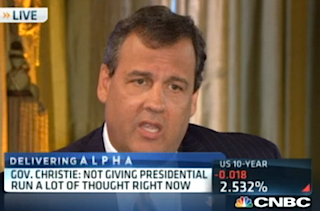 On Wednesday, New Jersey Governor Chris Christie sat down for a “Power Lunch” session with John Harwood at the CNBC Institutional Investor Delivering Alpha conference in New York City. But before they started discussing actual issues that are affecting Christie’s constituents, Harwood just had to ask about Christie’s political aspirations beyond the Statehouse.

Christie began by insisting that his trip to Iowa this week is only about campaigning for Republican Governor Terry Branstad and nothing more. Asked if he’s “leaning” towards a 2016 run for president, Christie answered, “No, I’m not leaning in any way, because I’m not giving it a lot of thought at the moment.”

“I’m aware. I’ve got a calendar,” Christie said to laughs from the audience. “Let’s face it, the folks who are leaning or actually doing stuff right now are oftentimes folks who people don’t know all that well. I suffer from a lot of things. That’s not one of them, so I’m in no rush to make those decisions.”

Christie said he would likely make a decision by the end of this year or early next year, but added, “whether I would tell you or anyone else at that point, I’m not so sure about the timing of that.”

While people might be “cynical” and say he’s knows and is just pretending to waffle, Christie said, “I really don’t know what I’m going to do.”