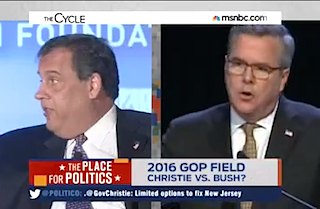 Speaking before a crowd of about 200 people at the 2014 Fiscal Summit in Washington, D.C. Wednesday, New Jersey Governor Chris Christie talked about what it would be like to run for the 2016 Republican presidential nomination against former Florida Governor Jeb Bush, who he considers a “friend.”

But that being said, Christie added that Jeb Bush’s plans for 2016 will not affect his own. “You know, we have to make our own independent decisions about whether to run for president or not,” Christie said. “But the only positive is that I know I’d have fun with Jeb on the campaign trail. We believe in a lot of the same things. I think we’re very similar in terms of our approach to solving problems and I also think he’s one of the nicest people I’ve had the chance to meet in public life. So you know, he’s a good guy. I like him.”

Christie made similar comments on his recent monthly radio show, as The Cycle’s Abby Huntsman pointed out Wednesday afternoon.

“It seems like what he was really trying to say is yes, it’s tough to run against someone that you’re friends with and that respect, but ultimately they will very much be in the same lane if they both decide to run,” Huntsman said. “And that would make it a lot more challenging for him to make it through the primaries.”