Christie to GOP: Reform Drug Sentencing and Be ‘Pro-Life After They Get Out of the Womb’ 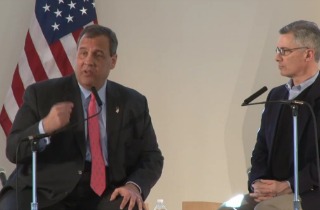 New Jersey Gov. Chris Christie delivered a message to his fellow members of the Republican Party on Thursday: being pro-life means reforming America’s drug laws and criminal sentencing procedures. Christie has long advocated for drug treatment programs as a means of reforming the country’s prison system, but Christie took a new tactic on Thursday when he framed that advocacy as a pro-life argument.

“I’m pro-life, and I believe strongly in the sanctity of life,” Christie told an audience in Jersey City on Thursday.

Addressing his fellow Republican governors, Christie said that “it’s great to be pro-life, but you need to be pro-life after they get out of the womb, too.”