Christine O’Donnell: ‘A Lot of People’s Dislike For Romney Is Based On Misinformation’
Video

Christine O’Donnell: ‘A Lot of People’s Dislike For Romney Is Based On Misinformation’ 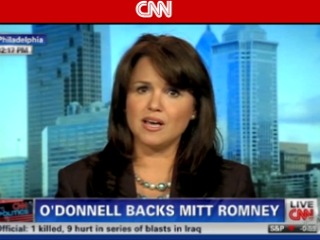 CNN’s Suzanne Malveaux took a moment this afternoon to speak with the inimitable Christine O’Donnell. O’Donnell, as you may recall, endorsed Mitt Romney as her candidate of choice, and she weighed in on what her support may have meant for him in terms of Tea Party votes.

Malveaux interrupted O’Donnell mid-praise to ask about a debate unfurling within the GOP regarding conservatism:

[Y]ou’ve praised Michele Bachmann, Rick Santorum, but they are both very strong Tea Party allies. But in the end, you went for the pragmatic choice of Romney here. But he’s only started to court these Tea Party supporters. Why would you urge them to go with Romney?

Here’s what O’Donnell had to say:

I think that a lot of people’s dislike for Romney is based on misinformation. And some of the feedback we’ve gotten since my endorsement has been exactly what we wanted. People took a second look at this record and they realized they had a wrong impression of him.

And, yes, Malveaux brought up That Whole Witch Thing. O’Donnell proved herself to be a good sport (yet again, because come on already), laughing and admitting that putting out an ad declaring that she “is not a witch” may have been something of a misstep.