Christine O’Donnell: I Looked At Politically Incorrect As A Way To Share My Faith 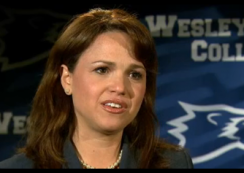 Christine O’Donnell, who, judging by the polls, is not long for this political world, did an interview with the Christian Broadcast Network in which she reflected on God (“God is the reason that I’m running”), being a conservative woman (“they wouldn’t do the things that they’re doing if I weren’t a woman”), and her time on the cable TV circuit circa the late nineties.

It’s hard to say at this point whether Bill Maher‘s relentless mocking of Christine O’Donnell has helped or hurt her. On the one hand she has been the subject of much not-so-nice criticism and the butt of many, many jokes. And, in her short time in the spotlight, has basically come to define the utter strangeness of this year’s midterms. On the other hand, she is now a nationally recognized name, and the polls have never indicated she ever had a shot at winning, so if she intends on following the Sarah Palin to its current conclusion she’s actually rather amazingly set up for it.

Either way, here’s how O’Donnell explained her former TV life. On a related note, I’m not convinced her former TV life (witchcraft and all) would have mattered all that much if she’d been able to back up her current political life with some tenable policy chops. Maybe next time. From the CBN interview:

“I’m not someone who has always planned her life for when I run for office one day obviously or I wouldn’t have said all those things on TV. In the 90’s I looked at all the TV opportunities as a ministry opportunity, as an opportunity to share my new found faith with a television audience that otherwise would not be watching when I would go on “Politically Incorrect”.

If I were planning to run for office in 10-15 years I would have been much more guarded not that I regret anything I’ve said but because I’m a vocal person I state my opinion when I think that something’s wrong or right I speak up.