Christine O’Donnell Slams Delaware GOP On O’Reilly: ‘I Busted Up The Backroom Deal’ 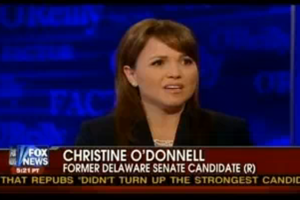 With nothing left to lose, former Delaware Republican Senate candidate Christine O’Donnell is finally talking to the national media. After rejecting invitations several times, O’Donnell gave her campaign post-mortem to Bill O’Reilly, and she is not happy with the way the Delaware Republican establishment treated her.

O’Donnell seemed almost comfortable with the nature of the attacks against her throughout the campaign, which O’Reilly characterized as similar to what Sarah Palin endured in 2008. She did not credit those attacks with doing her significant campaign damage, and instead insisted that it was “the fact that the Delaware Republican leadership didn’t support me” that resulted in her loss. “I busted up the backroom deal,” she told O’Reilly, winning the primary against “anointed” opponent Mike Castle. With her, she explained, they acted as it “it’s not her turn” because “we didnt pick her.”

She did admit that some of the “double standard” on her was due to being a female, though O’Reilly countered that Carly Fiorina in California did not face similarly personal attacks. O’Donnell refused to elaborate further, however, telling O’Reilly, “you tell me!” when asked what else led to the antagonism in the media. O’Reilly, on his part, scolded her for not coming on the show– “I saw you on programs that have six viewers– we have six million,” he told her, calling it a “big mistake” that she evaded him.

As for her future, O’Donnell promised no reality shows, “no Dancing with the Stars,” but announced there was “definitely” a book deal in the works and other projects.

The interview from last night’s Factor via Fox News below: