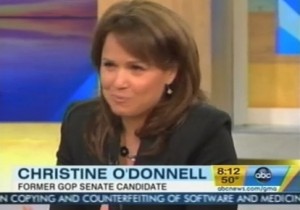 Despite all the cold water being thrown on the idea, former Senate candidate Christine O’Donnell may have surprised some people this morning by revealing witch potential 2012 candidate is casting a spell on her (take that, Jon Stewart!): Secretary of State Hillary Clinton. In an interview with Good Morning America‘s George Stephanopoulos, O’Donnell said she would “love to see (Hillary) take out Obama in the primary,” and would even be tempted to switch her registration to vote for Clinton.

Oddly, O’Donnell didn’t even mention mentor Sarah Palin until fellow guest D.L. Hughley brought her up, initially saying of possible GOP challengers that “anybody is better than Obama.”

Hughley gave Palin as an example of someone who’s not better than Obama. O’Donnell replied that “Sarah shoots from the hip,” to which Hughley responded, “So does a greeter at Wal-Mart, but I wouldn’t want him to run for President.”

Palin fans may be heartened by O’Donnell’s defense of their idol, but they ought to keep in mind that, in promoting a Hillary Clinton candidacy, O’Donnell is also advocating for the one opponent who could completely neutralize a key Palin advantage: the chance for voters to participate in another historic election, this time to elect the first female President of the United States.

O’Donnell’s kind words for Clinton were a follow-up to a Twitter message in which she praised the Secretary of State’s tough response to the most recent Wikilieaks document dump, but this isn’t the first time she has promoted a Hillary Clinton candidacy. Several months ago, O’Donnell claimed, in an interview, to have seen “many Hillary Clinton for President ads running.” They’ve obviously had an effect on her.