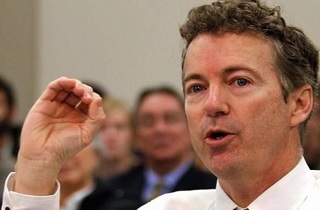 How desperate are Republicans to solve their problem with women? Desperate enough to argue that there is no War on Women, except for the one that then-President Bill Clinton conducted on intern Monica Lewinsky, and which continues to this day because Hillary Clinton somehow also got blown in the Oval Office, if you really think about it. That’s only a slight paraphrase.

On Sunday’s Meet the Press, Senator Rand Paul (R-KY) was asked about comments his wife made in a Vogue magazine article:

While her husband jokes that his “gut feeling” that Hillary Clinton will not run for president is a good thing since “all the polls show her trouncing any opponents,” Kelley practically cuts him off to say that Bill Clinton’s relationship with Monica Lewinsky should complicate his return to the White House, even as First Spouse. “I would say his behavior was predatory, offensive to women,” she tells me.

Host David Gregory asked “Are these issues something that you really think will be fair game and an appropriate part of a campaign, should she be the nominee?”

Paul decided the best way to push back on the whole War on Women idea was to explain how fair it will be to attack Hillary Clinton based on her husband’s actions 19 years ago. “The Democrats, one of their big issues is they have concocted and said Republicans are committing a war on women,” he told Gregory. “One of the workplace laws and rules that I think are good is that bosses shouldn’t prey on young interns in their office.”

Paul went on to say that then-President Clinton “took advantage of a girl that was 20 years old and an intern in his office,” calling it “predatory behavior,” and wondering how Democrats “have the gall to stand up and say, ‘Republicans are having a war on women,'” concluding that “yes, I think it’s a factor.”

He did add that “it’s not Hillary’s fault, but it is a factor in judging Bill Clinton in history. This is in regard to the Clintons. Sometimes it’s hard to separate one from the other.”

Yes, it really can be tough to tell them apart, especially through Hillary Clinton’s mountain of extra scrotums.

Part of the reason is that Republicans, at the time, tried to maintain the fiction that their impeachment was “about the lying,” while Democrats maintained it was “about the sex,” and the whole incident became a proxy for a culture war between puritanism and privacy. Of course, neither side, nor the national media, could have focused on the predatory aspect of the scandal without relinquishing Monica Lewinsky as a vessel for contempt, along with every other woman connected to it.

What’s really interesting about Rand Paul’s argument, though, is that the federal law that relates to the behavior he condemns is Title VII of the Civil Rights Act of 1964, which might ring a bell for Paul’s followers. In a 2010 interview with Rachel Maddow, Paul said “There are ten different titles to the Civil Rights Act and nine of ten deal with public institutions and one that deals with private institutions and had I been around I would have tried to modify that. When you support nine of ten things in a good piece of legislation do you vote for it or against it and sometimes those are difficult situations.”

He was referring to Title II, which covers discrimination in public accommodations, but his philosophy, that the free market should guide the actions of private businesses, would seem to apply to Title VII, as well, at least as it relates to private employers. That puts him in the clear where Bill Clinton is concerned, but not with most of the other working women in America. It’s possible that when he was being interviewed by Maddow, he simply forgot about Title VII, but his remarks on Sunday were entirely compatible with that view. While imagining such an offense in his own state, Paul didn’t describe any possible legal remedies, but rather, that there would be frowning and dissociating.

Gregory ended their interview on that note, but it would be worthwhile for Sen. Paul’s next interviewer to ask him his views on Title VII, which only evolved to cover sexual harassment in the late 70s, or on other laws protecting women, such as the Violence Against Women Act, which he voted against. If Senator Paul thinks that we should prevent sexual harassment through a combination of frowning and rescinded dinner party invitations, then he should say so.

[photo via The Washington Times]